Experience unparalleled luxury and limitless fun at this lavish resort in Dandeli which offers well-appointed rooms, an incredible restaurant, a wide range of activities and upscale amenities.

In the interiors of Karnataka, hidden away and protected by thick forests lies an incredible oasis of unperturbed natural beauty. Unspoiled by civilization and far from the madding crowd is Dandeli. In this magical, mystical land of rivers and mountains, many of nature’s greatest attractions, fiercest creatures and the most exciting adventures await to be discovered.

We invite you to visit this dreamland to believe it. Whenever you decide to come, we have you covered. Of all the resorts in Dandeli, Starling River Resort offers the widest variety of accommodations, which are comfortable, reasonably priced and imbibe the gentle spirit of hospitality that is native to this very special region.

Happiness is an Infinity Pool! The Infinity Swimming Pool at Starling provides hours of entertainment and acts as a social hub for our guests. From the pool, one can witness the eternal ballet of nature with...

In all humility, the River Deck Restaurant at the Staring River Resort is legendary. Not only does it serve delectable world cuisine, it also creates an environment that is conducive to quick...

Children can access the Play Area at our resort for a fun filled time allowing parents to run wild and enjoy themselves while their minds are at ease knowing that the little ones are cared for...

Perhaps the best and most visceral activity that one can partake in is to explore the wildlife in Dandeli. Simply attire yourself with comfortable walking shoes, a bottle of water...

Fly like a bird! Zip Lining in Dandeli allows users to strap onto a high wires and glide through the air, giving wonderful vantage points and views of the neighboring areas. Although it looks scary...

At first glance, Dandeli leaves visitors speechless and spellbound by its sheer beauty. This little town has long been a hidden gem, forgotten and left alone to blossom under nature’s watchful eyes into a veritable paradise.

In 1930, the population of Dandeli was only 515. It consisted mainly of people who worked for the famous Indian Saw Mill, the West Coast Paper Mill or for Karnataka Power Cooperation.

It is said that Dandeli gets its name from a mythical deity called “Dandalappa” who lost his life because of his loyalty and has since then become part of folklore. Since those ancient times, this has been sacred ground called “Dandeli.”

Visitors are tempted to explore and experiment with this wonderland through adventure sports and activities but there are also a number of important tourist destinations and places to visit in Dandeli that are well worth experiencing.

From breathtaking vantage points to gargantuan forts and beautiful temples steeped in antiquity, Dandeli is a veritable Pandora’s box of earthly delights and spiritual experiences.

Dandeli National Park is home to some of the most breathtaking flora and fauna in the subcontinent such as tigers, leopards, black panthers, elephants, deer, antelopes, and bears. A number of interesting reptiles and over 300 species of birds also inhabit this prolific land.

If you are rested and ready, there are a number of fun activities to do here such as River Rafting, Trekking, Boating, Mountain Climbing which will help you discover Dandeli but also find out more about yourself.

"Fantabulous hotel with great food. Its a huge property bang on the banks of Kali river . Amazing resort with delicious cook. Few names I would like to mention and thank them for a wonderful stay with my expended family of 15 people: Chef: Shavez, Floor manager: Franklyn, Reception: Rajvir.
These three people made my stay a memorable one . All the staff including the service person Manoj were very helpful and humble. View was fantastic and service was unbeatable . Everyone in my family enjoyed the stay. Food was really really amazing with wide variety and tasty .
People going to dandeli should stay here as it has everything one wants."
-Saurabh Sathe, Nov 3, 2022, Tripadvisor

"The best resort to stay if you visit Dandeli"

"We had the best time of our lives in here. There are affordable tents, premium cottages as well has AC rooms to cater every person's requirement. The staff is courteous and kind spoken. We received special guest treatment in here. The best part is we had chat with the manager who guided us about everything tge resort offers. It felt like talking to a friend. We would recommend everyone to visit this special place."
-Kavilash panicker, Oct, 2022, Tripadvisor

"We vistited this hotel the last week. The staff were very great and quality service provided. The food is delicious and excelent , also the rooms were clean and confort bed. it has a fantastic location for the people who connect with nature. Will recomendet thes hotel for all persons that to travel at this place."
-Richa, June, 2022, Tripadvisor 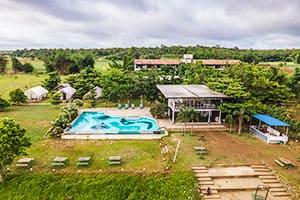 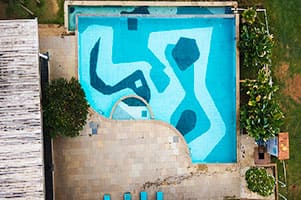 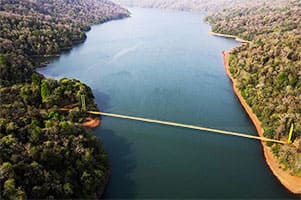 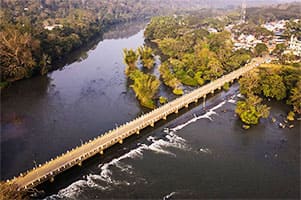 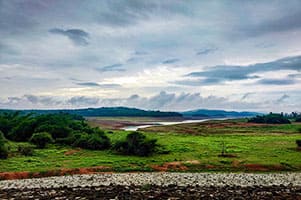 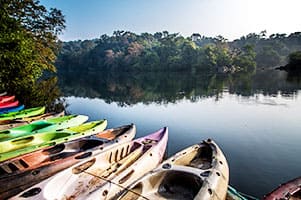 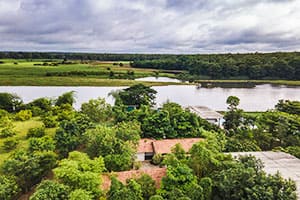 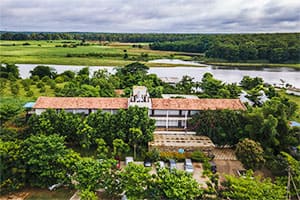 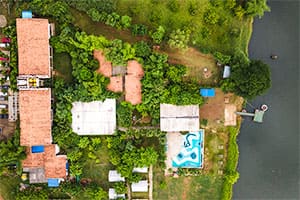 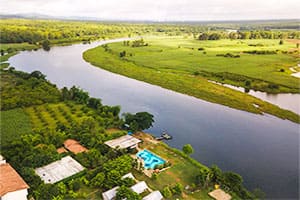 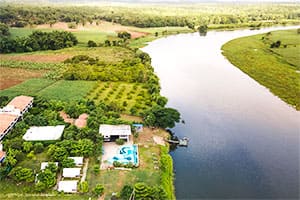 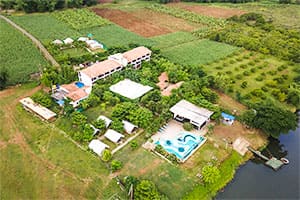 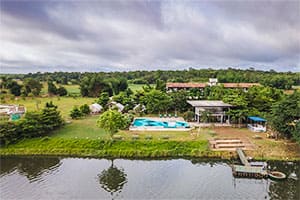 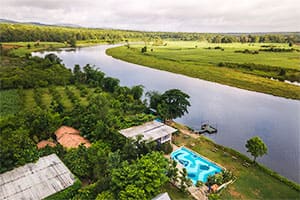 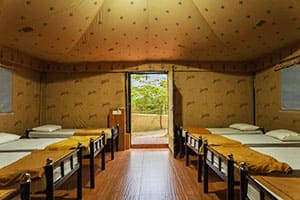 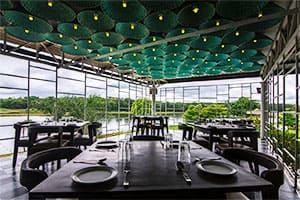 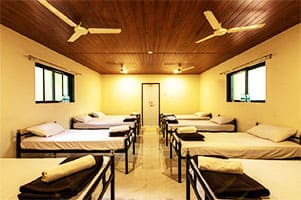 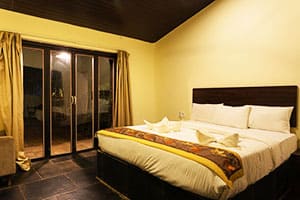 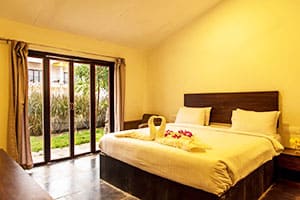 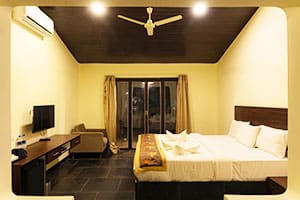 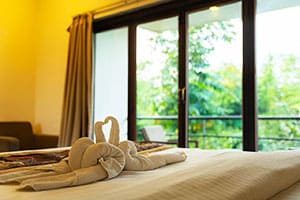 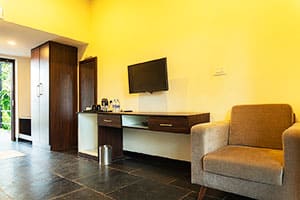 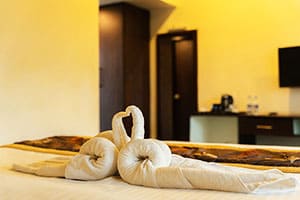 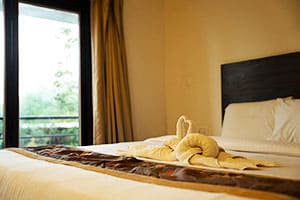 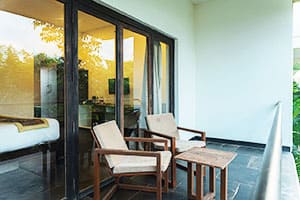 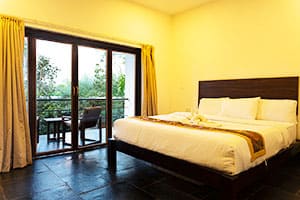 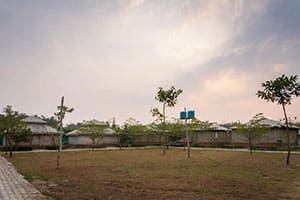 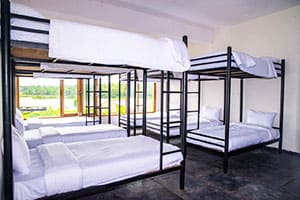 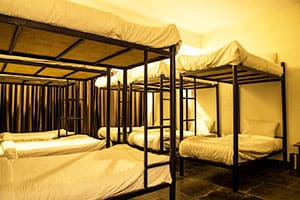 Dandeli is worth visiting throughout the year but winters are especially pleasant and enjoyable. The best months to visit are October to May but on average winter months are the busy time for Dandeli.
Contrary to popular belief, the cost of visiting Dandeli is not very expensive. An average good hotel or resort room here costs around INR 1500 per person, depending on occupancy and other factors. Other accommodations such as cottages, tents, dormitories and shared spaces are also available.
Dandeli is a good destination for family vacations. It offers a number of fun and wholesome activities like Adventure Sports, Kayaking, White Water Rafting, Trekking, Wild Life Safari and Camping. The area is safe for families and tourists. The River Rafting in Dandeli is especially famous.
A single session of River Rafting in Dandeli costs around INR 600 to INR 1500 per person not including transportation costs. This may seem expensive but it is lower than many other rafting destinations and groups can get discounted rates.
Dandeli is best for honeymoon trips. Its closeness to nature, beautiful and serene surroundings, secluded resorts and different types of couple accommodations has made it a popular destination for honeymooners. There are also many honeymoon packages for Dandeli.
Bangalore to Dandeli is about 485 kms and it takes around 9 hours to make the trip. The road is very good and there are a number of good sights along the way. There are also many busses that run this route and the option of taking a cab or hiring a car is also available for travel to Dandeli.
The distance to Dandeli from major cities is as follows:
Dandeli to Pune: 435 Kms (8 hours, 15 mins)
Dandeli to Belgaum: 87 Kms (2 hours, 27 mins)
Dandeli to Kolhapur: 210 Kms (4 hours 8 mins)
Dandeli to Dharwad: 56 Kms (1 hour 33 mins)
Dandeli to Hubli: 72 Kms (2 hours and 5 mins)
Dandeli to Banglore: 485 Kms (8 hours and 7 mins)
The Starling River Resort is one of the best places to stay in Dandeli where rooms start from around Rs. 2000 per night. The Resort has around 28 rooms for guests and also offers other types of accommodations such as cottages, tents, dormitories and more.
Yes. There is a full-fledged outdoor swimming pool at the Starling River Resort in Dandeli for guests that overlooks the Kali river.
The Starling River Resort is situated on the riverbank and it is very easy for guests to go to the river from within the property.
The Starling River Resort offers all modern amenities and services such as Electric Kettle, Refrigerator, Flat Screen TV, Telephone, 24 Hour Guest Desk, Room Service, Free Parking, Air Conditioning, Luggage Storage, Wake Up Service and more.
There are a number of interesting places and tourist destinations around the resort. Some of the most visited include: Dandeli Wildlife Sanctuary, Supa Dam Backwaters, Kali River, Sathodi Falls, Moulangi Falls and Syntheri Rocks.
Yes. The Starling River Resort on the Kali River and the Starling Century Resort in Dandeli offers free breakfast with room bookings made directly through their website or directly through the resort’s board numbers.
No. Currently, there is no spa or spa services available at the resort.
The River Deck serves Ala-Carte & Buffet Restaurant serves breakfast, Lunch & Dinner.
No. The resort does not operate a bar on the property but guests are allowed to bring their own alcohol or visit nearby bars and restaurants.
At Starling River Resort a fusion menu of south and north Indian food is served with a touch of local delicacies.
The standard Check Out time is 11 am and the Check In time is 1 pm.
Yes. Starling provides free parking is available for all visitors and guests.
Due to the location of the resort which is in jungle WI-FI service is not available.
Yes. There are many fun activities at Starling River Resort. Archery, Target Shooting, Zip Lining, Nature Walks, Board Games, Jungle Safari are some of the activities popular with guests.
Yes. The resort offers a shuttle service to and from the airport and train station.
Yes. You can book the dormitory category of rooms for groups online. For all other group bookings, one has to call the board numbers to book.
Yes, you can change or cancel your booking if it is in the stipulated cancellation period.
The closest airports from Dandeli are Belgaum and Hubli. Belgaum is about two and half hours by road and Hubli is around 2 hours by road depending on conditions.

Dandeli is good for 2-5 days. One can go there just for the weekend but there are enough activities to do and places to visit in case one wants to spend a few more days here.